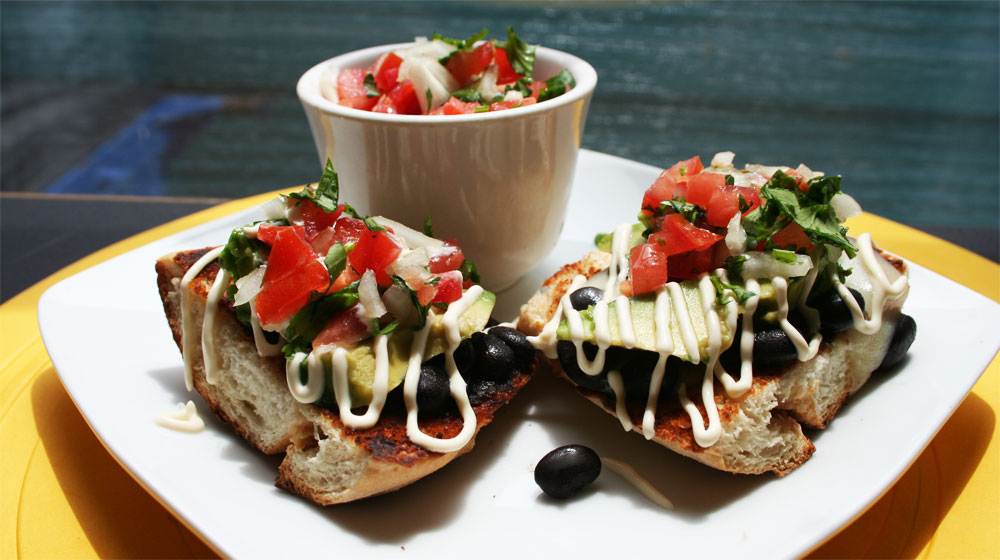 Imagine sinking your teeth into a crispy bread, layered with savory beans and the gooeyness of the melted cheese along with a zesty salsa! OMG!! Your imagination turned into what mexicans call a Mollete which is a prep very similar to an italian bruschetta. Molletes are a common breakfast option in Mexico and are usually beans (refried or whole) over a toasted bread topped with melted queso oaxaca (like a mozzarella). Other toppings include fresh cheeses, avocado, salsas, crema, and many more delights.

The Molletes are usually made with a bolillo which is a mexican bread very similar to a french baguette. And the way I grew up making them, was over a sauce pan with a little bit of olive oil to toast them. A lot of people just put them in the oven, so you could also make them that way. If there isn’t a mexican grocery store nearby you can definitely substitute it for a baguette or even a ciabatta roll. Aside from breakfast or lunch they are also a great side dish or appetizer, I hope you enjoy this recipe. 🙂

2 bolillos or a petite french baguette (for a large baguette just cut it into a six inch portion)
1 tb of olive oil
1 cup of black beans (whole or refried)
1 cup mexican oaxaca cheese, mozzarella or monterrey jack, grated (or anything that melts will do)
1 avocado in slices
mexican crema or sour cream
pico de gallo salsa or any other salsa of your choice

Slice the bread in half lengthwise, then cut in half so you should have 8 pieces. Heat your olive oil in a large sauce pan and layer the bread facing down (from where you sliced it) and toast for about 2 minutes on a medium high flame, making sure they don’t burn. When they have a nice golden color flip over and lower your flame to low. Spread each piece with your beans and sprinkle over about 4 tablespoons of grated cheese. When they are all assembled, cover with a lid so the cheese melts. If you notice the cheese hasn’t melted thoroughly and your pan is becoming too hot. sprinkle a tsp of water towards the center of the pan to create steam (that will melt the cheese quick) and cover immediately. After your cheese has melted remove them from the pan and place them in a cool dish and top with some fresh crema, avocados and your choice of salsa!